THE ORIGINAL MYRA TOO

Blue oval with a black “M”

Building the replica Myra Too

Due to the fire that tore through Barnett’s boatshed in 1971 the original plans and half models for Myra Too were destroyed leaving McLeod and Payne to work from a combination of skill, instinct, memories and old photos to create a truly personal and historic replica.

Using Payne’s plans and a wooden half-model based on those lines, McLeod first created a mould from which to begin the build. He used silver ash for the keel and ribs, placing the ribs over pine stringers. Three thin layers or ‘skins’ were then added to complete the hull. The second of Klinkii plywood and the first and third (the outer layer) of historic Queensland red cedar. The cedar is believed to be around 400-600 years old and has been polished to an eye-catching deep red hue. Myra Too has yet to prove herself the fastest yacht in the Australian Open Skiff Trust’s fleet of historic 18-footers, but she will certainly be the prettiest. In another nod to history. McLeod has incorporated wood from another champion vessel built by Billy Barnett, Gretel II (designed by David Payne’s uncle Alan Payne) into his detailed design.

Incorporating some modern design element, the vessel has been affectionally nicknamed ‘Myra Too-and-a-bit’. As the intention is to sail the boat for several seasons, the replica is slightly stronger and heavier than the 1950 original which Barnett built light as he only required the hull to last in good condition and be competitive for one season. McLeod has moulded the replica hull in three layers of planking glued together giving a stronger shell than the single layer of individual planks used on the original. The supporting frames, stringers and floors are also slightly bigger in many places and arranged to be stronger than the original hull’s structure.

The glue and varnish used in building the replica was kindly donated by Les Baker of Norglass with Goldspar donating the spars. Also worthy of acknowledgement are the many volunteers who passed through McLeod’s custom-built shed to provide advice, company and an extra set of hands during the build.

The process of rebuilding these replicas is also the process of celebrating, reminiscing and commemorating. In March 2013 we were delighted when original crew member Brian Stewart now living in Queensland, came across mention of the project to build a replica Myra Too online and reconnected with the Sydney sailing community and his old skipper Bill. In May 2013 a tribute day was held at the Sydney Amateur Sailing Club to celebrate Billy Barnett and his achievements as a sailor and shipwright as well as raise funds for the completion of Myra Too.

The events surrounding the build have been just as important as the launch in bringing together the sailing community and celebrating our maritime heritage. 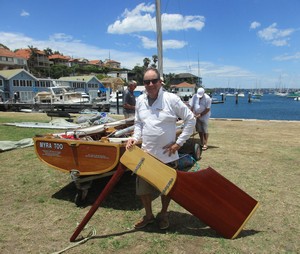