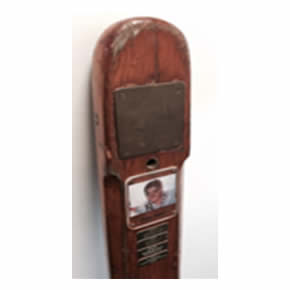 Made from an old bumkin off the original Britannia, this trophy features, and is named after George “Raw Meat” Pearce, a character from a past with a history full of characters. It is awarded to the handicap winner of the series and because of the nature of our automatic handicapping system, the winner ca be rightly proud of having sailed at their best.

George Pearce was a jovial man liked by all and a mentor for younger sailors. Crows Nest, skippered by Billo Hayward with George as an outstanding crew member, won the 1948 World Championship for the J.J. Giltinan Trophy in Auckland – a first for a Sydney Flying Squadron boat.

Not only known as “Raw Meat”, but also “Sirloin” and “Lord Porterhouse”!  Mums fed their men meat, and George sure did like his meat, hence the nicknames. Or was it because he allegedly bought a leg of lamb one race day, and took it with him on the skiff, as you would, and most definitely you would if there was a chance the leg would go missing!