The history of The Mistake

Built 1933 in Brisbane at the yard of A.J. Whereat, by Lance Watts.

Mistake is probably the most significant 18-footer of the 1930’s period.

Previous histories point to Aberdare, the first of the heel-less 18’s as being the boat that changed the face of 18-footer racing and she has tended to get the lion’s share of the publicity. While it is true that Aberdare was the prototype of the heel-less 7-foot beamers, she was nonetheless a Queensland boat, and as long as she stayed up there, she was no threat to the powerful Sydney Flying Squadron who favoured the big-beam “troopships”. They might have to deal with them once a year at Interstate level, but as long as the Aberdare type stayed north of the border, the NSW status-quo could be preserved.

The Mistake changed all that. She was the cuckoo in the Sydney nest that polarised the SFS members and was directly responsible for the acrimonious split that late in 1934 led to the formation of the NSW 18-footers Sailing League. 18-footer sailing in NSW was never the same again.

The Mistake was commissioned in strict secrecy during the winter of 1933 during the height of the arguments over the legality of Aberdare. Although she was Bob Cuneo’s boat, funding for the boat came from the W. Arnott Biscuit Factory where Bob Cuneo worked.

In November 1933, this was reported in a Brisbane newspaper, “Mums the word – Another skiff type on the stocks. A third boat of the Aberdare type is on the stocks at Whereats. Officially she is being built for Nth Queensland interests but no names are being divulged. When it was learned that a well known sail making firm was making sails to Aberdare size it was surprising to learn that the job was for a Sydney customer. No further information can be obtained.”

This was followed a few days later by, “Owner still unknown. Strict secrecy ever since Lance Watts placed the order. He has been constantly probed by sailing followers as to its destination but he has remained as non-committal as an official weather forecast.”

By late November, the cat was out of the bag, “Strong criticism of the skiff type 18-footer was voiced at a meeting of the SFS when the application of Mr. Ft. Cuneo to have a skiff type admitted to the register was considered. After the application was granted, there was a batch of further applications for registering new boats of a similar skiff type but the chairman took a show of hands and they were debarred with a few dissentients. /The Mistake/ Mr R. Cuneo’s new boat built by Lance Watts, was constructed on similar lines [to Aberdare]”

Although they had reluctantly accepted her registration, a week later, the Sydney Flying Squadron closed its register to prevent any similar boats being built. Her name, and insignia 2+2=5, was a jibe at her detractors who considered the boat, among many other less generous terms, to be “a mistake”. 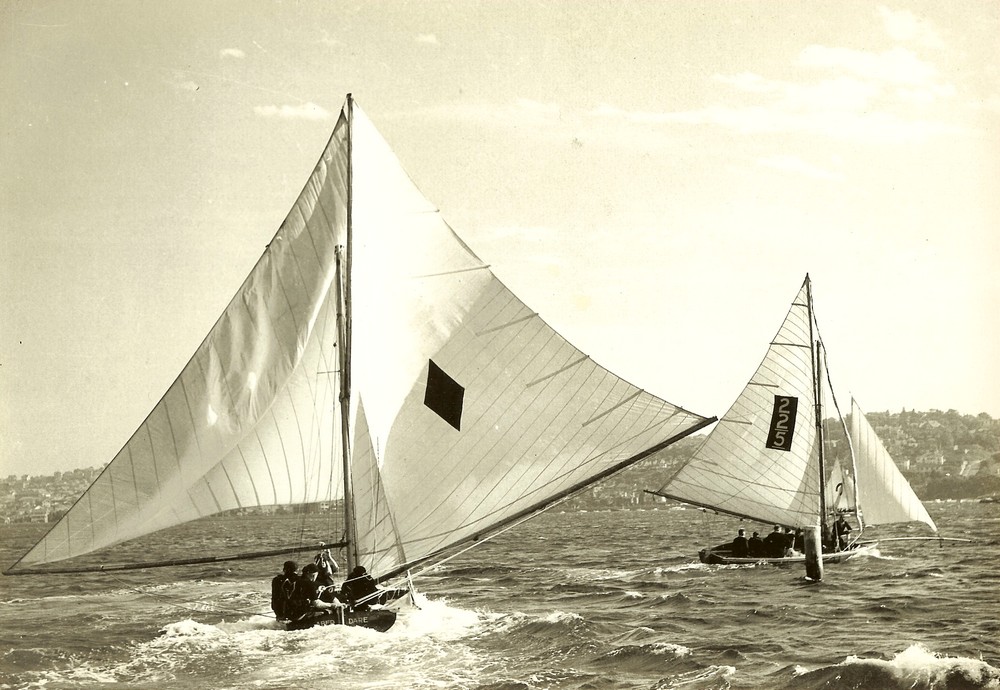 The Mistake had her first race on 9 December 1933 and was unimpressive for much of that season. Legend has it that she was forced to sail with ten crew and this may well be true but it has yet to be confirmed. The 1933/34 season was not a happy one for the SFS. Dissent was growing, and it was not just over the heel-less 18’s.

A number of the members, notably ex President James Giltinan, had strong contacts in the gambling industry and had long proposed shifting the SFS racing to Sunday to take advantage of the lack of sporting activity on that day. These proposals had always been soundly defeated but once combined with the disenchantment felt by certain sailing members others over the exclusion of the heel-less type of 18-footer, the scene was set for a dramatic shift in power.

In September 1934 a breakaway club was formed in Brisbane by the supporters of the old “troopships” and asked the SFS for its support. The Brisbane 18-ft Sailing Club refused to recognise this new club and excluded them from their planned Interstate in 1935. Exasperated at this turn of events, the SFS officially withdrew from the 1935 Interstate and cancelled their long-standing Interstate agreement with the Brisbane 18ft Sailing Club. This was the last straw for many SFS members.

During the Xmas New Year break 1934, a new 18-footer yacht club was announced, calling itself the NSW 18-footers Sailing League, dedicated to the promotion of the “modern” 18-footer. All was chaos at the Sydney Flying Squadron.

Secretary of the new club was James J. Giltinan who 12 months earlier had resigned from the Sydney Flying Squadron. The three who were credited with forming the new club were Jim Kendall, part owner of The Mistake, Gus Black owner of Scot, and Harry Hamill, a foundation member of the Rugby League and a close friend of J.J. Giltinan. Hamill was also the editor of the Squadron’s weekly newspaper Sailing Through Australia.

Hurting the Squadron even more was the fact that the new club immediately aligned itself with the Brisbane 18-foot Sailing Club and announced that their first race as a club would be the 1935 Interstate, staged on Sydney Harbour.

At the time, they only had five boats on their register, The Mistake, Arawatta, H.C. Press IV, Scot and Australia, and were joined a few weeks later by Shamrock, but the lure of Interstate racing brought the spectators out in force. The NSW 18-footers Sailing League’s first race on 3 February 1935 was the Interstate championship, won by Aberdare, from Sid Barnett in Scot. The event was a triumph for the new club.

The Mistake was a consistent performer in those early years of the League. By 1937 Bob Cuneo had sold his interest in the boat and Jim Kendall took on H. Michel as a partner. They brought Sam Monkhouse in as skipper around 1938. In 1941 Michel donated The Mistake to the Art Union fund to be raffled for the Lord Mayors patriotic fund. The boat was won by J.C. White who then got Sam Monkhouse to sail her which he did until 1945.

In 1946 Billy Dodds bought The Mistake and raced her for a season or so and then retired her.

The following season, he launched a new boat built by Lester Woodforth, which sent a message out to all those who had campaigned against his old charge. He called her “No Mistake” and her insignia was 2+2=4. 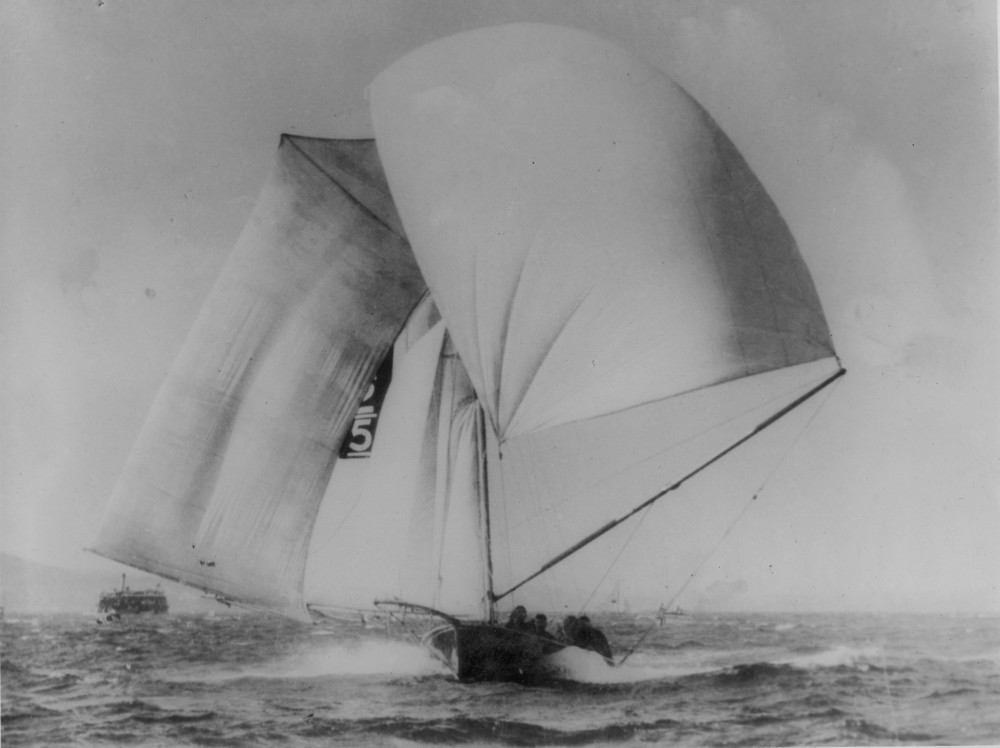 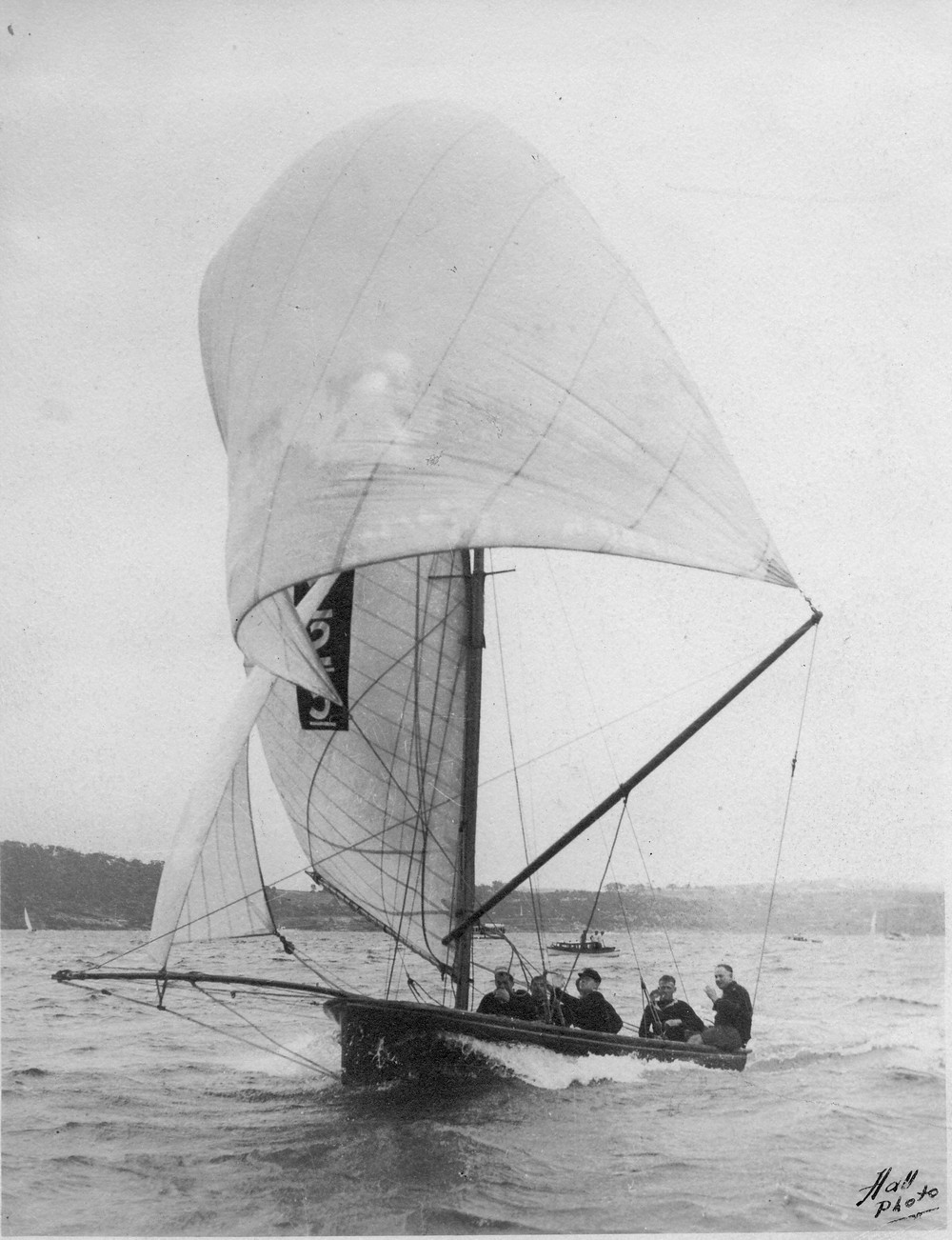