Race 17 of the 2016-17 Season and Fifth (and final) Heat of the Summer Point Score.   Hot and humid conditions prevailed in the boat park where 8 skiffs prepared for the day’s sailing, with the moist cloud cover showing signs of burning off by late morning and a light seabreeze developing.  Most skiffs opted for no.1 big rigs, Aberdare short on crew decided on no.2 rig.

The start was held up for 10 mins by stand-in PRO Dave Longworth as the skiffs made a slow passage across the harbour to Shark Island in the light conditions, with the race getting underway on the no.1 NE course into a light ENE breeze.   Scot and Britannia were first away, followed closely by Tangalooma, Australia IV and Alruth, with The Mistake missing their start by a few minutes.  The back markers then had 11 mins to fill-in with Harold Cudmore warming up by applying some pre-start match racing maneuvers on Aberdare before they finally started the race.   Meanwhile, all competitors were trying to figure out the best option to manage a decidedly difficult wind pattern – with the breeze coming and going from east to northeast, and a different breeze on each side of the harbour. 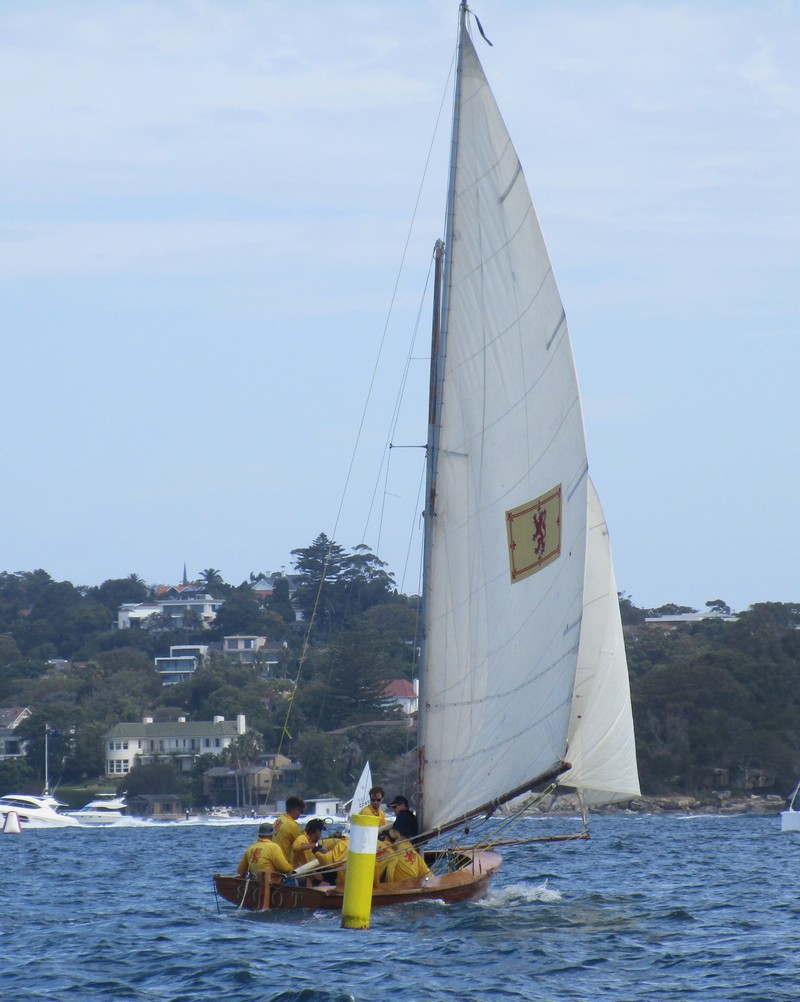 Scot “cracked the code” early and rounded the Beashel Buoy in first place with an impressive lead and a quick spinnaker set for the run to Shark Island, followed by Tangalooma, Australia IV and The Mistake, then a gap back to Britannia and Alruth, then Yendys well ahead of Aberdare.

As the skiffs converged on the gybe mark at Shark Island there was a distinct area of soft breeze to negotiate with the breeze moving to the east for the run down to Clark Island.   Scot continued to hold a comfortable lead, while Tangalooma, The Mistake and Australia IV stayed locked together, with Yendys closing the gap and catching Britannia, then Alruth and Aberdare.

Scot was first to round at Clark Island for the beat into an ENE breeze up to Chowder Bay, and the positions behind remained much the same except that Yendys was now up to fifth place and gaining.  Scot continued to hold a good lead when they rounded the Chowder Bay mark for the tight spinnaker run across to Shark Island, Tangalooma was next, then The Mistake, Yendys and Australia IV with a gap back to Britannia, then Alruth and Aberdare.

Scot was first to round the mark at Shark Island, where the breeze had gone into the east/south-east for the run to the finish.   Unfortunately for Scot they were also the first to sail into the wind void that followed, with the next four skiffs closing right up to Scot.   When the breeze eventually filled-in it was Yendys that made the most of the situation to roll-on through to take the lead from The Mistake just before the finish, then Scot, Australia IV, Tanaglooma all within 1 min of each other, then a gap back to Britania, Alruth and Aberdare.

The Summer Point score was won by The Mistake from Tangalooma and Alruth.

With thanks to our on-water support team of Barley, Coral, Peter, Adrienne, Louise, Chuck, Eva, David and the rest of our tireless volunteers, along with the dedicated team at Rosman Ferries.  We look forward to seeing you down at the Squaddie.