Race 16 of the 2016-17 Season and Race 3 (and final race) of the Historic 18 Footer Australian Championship.   Whilst conditions in the boat park were decidedly hot, the prospect of a developing NE seabreeze was most welcome as 10 skiffs prepared for the days racing, with most opting to carry no.2. mainsail with no.3 jib.

The race got underway off Clark Island on the no.1 NE course, into a fresh nor’easter and the end of the run-out tide, making for some bumpy water for the early part of the race.  The start line favoured the flag-end, and the first attempt to start resulted in a general recall.   The second start was successful with Australia leading the way after claiming the pin-end, under the lee bow of Yendys.

Australia was lead boat for the first half of the beat down to the Beashel Buoy, from Yendys,  Aberdare and Myra Too, until the lack of maintenance on the bilge pumps and the loss of their bailing bucket began to take its toll.   After splitting to sail opposite sides of the harbour for the final approach, Yendys rounded the top mark ahead of Aberdare followed by Australia, Myra Too, Scot, The Mistake, Britannia, Australia IV, Alruth and Tangalooma. 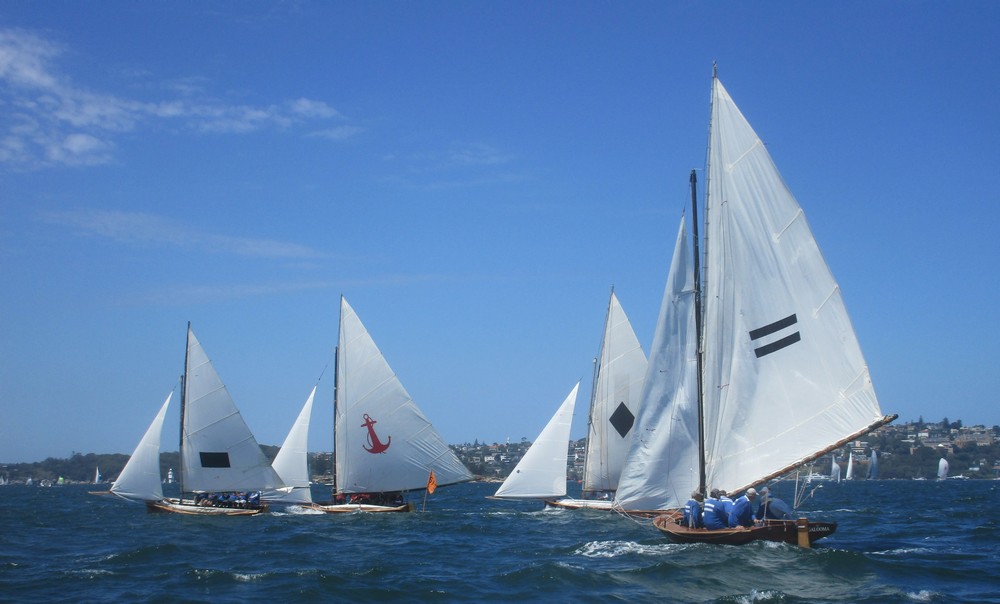 Yendys led down the first run to Shark Island but on the approach to the mark Aberdare drew level to claim the inside run when the skiffs gybed, each with various sail handling issues to deal with, with Aberdare moving ahead but on a low course for the bottom mark and Yendys ending up on a more direct course to the mark.   Aberdare rounded the bottom mark first with Yendys not far behind into a freshening breeze, then a gap back to Australia, Myra Too, The Mistake and Scot, all racing in close company, then Britannia, Australia IV, Tangalooma, and then Alruth after making a forced detour into Rose Bay.     Unfortunately for Tangalooma they suffered a terminal fill-up going to windward after a bad tack off Bradley’s Head.

Aberdare maintained their lead on the beat up to Chowder Bay where they rounded and set a peak-head no.3 spinnaker for the run to Shark Island making some gains in the process. Yendys opted for a no.4 peak-head spinnaker.    Aberdare gybed cleanly at Shark Island for the run to the finish, setting a ringtail late in the run to consolidate their time on rating to take the gun just a bit over 3 mins ahead of Yendys also with a ringtail.   Myra Too made up ground on the run from Chowder to move into 3rd place at the finish, less than a minute ahead of The Mistake, then Australia and Scot close together, then Britannia, Australia IV and Alruth.

With thanks to our on-water support team of Barley, Brian, Russell, Rob, Peter, Adrienne, Bruce, Andy, Chuck, Louise, Eva, Nancy, Bill, Nick (on the ferry) and the rest of our tireless volunteers, along with the dedicated team at Rosman Ferries.  We look forward to seeing you down at the Squaddie.