Race 3 of the 2017-18 Season and Heat Three of the Spring Point Score.   After a cold and wet Friday, the first Sydney rain for well over 2 months, sailors and patrons were greeted in the boat park by clear skies and fresh southerly conditions.   Six skiffs were on hand, with small rigs the unanimous choice for the day.   A late decision was made to get Yendys on the water by topping up their depleted crew with some Aberdare crew, with John Winning having his first sail on Yendys.

The race got underway from a handicap start off Athol Bight on the no.4, Southerly course, into quite a fresh southerly that was expected to moderate during the afternoon, conditions were quite bumpy and the wind-chill factor very apparent.   Britannia was first away off 15 miins for the beat up to Clark Island, sailing a course towards Rushcutters Bay.  Tangalooma and Scot were next off 11 mins with Tangalooma heading up the left side towards Bradleys while Scot went right towards Garden Island.   Next away was The Mistake off 8, Australia off 6 and Yendys off scratch.

Britannia was first around Clark Island with a comfortable lead for the free run to Chowder Bay, with Scot rounding ahead of Tangalooma, then The Mistake, Australia and Yendys.   Britannia maintained a good lead at Chowder for the beat up to Shark Island, with Scot in second place, then Tangalooma, The Mistake, Australia and Yendys now in good touch after a fast run. 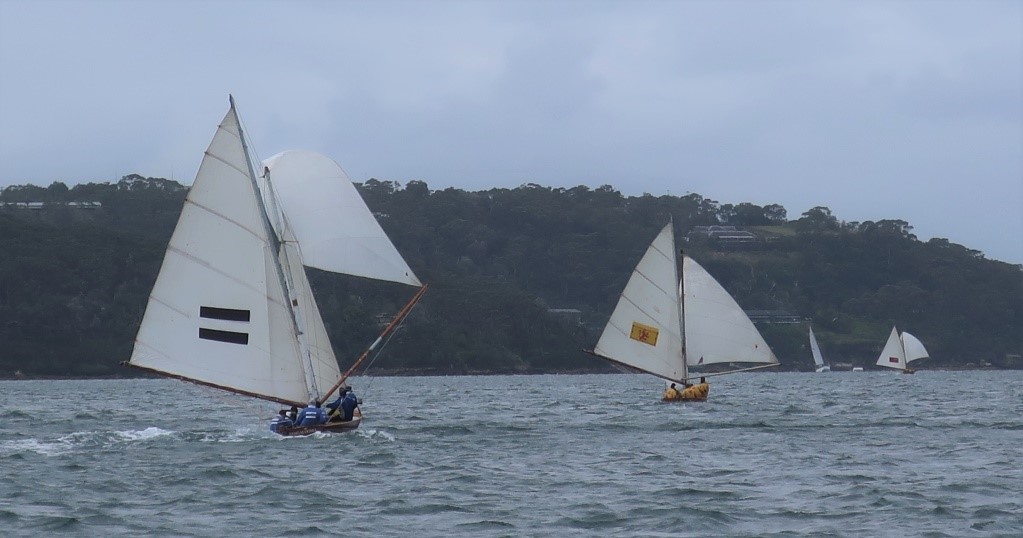 Britannia was first to round Shark Island for the long run against the tide back to Kurraba Point with the breeze now a bit lighter with the occasional fresh gust.   Scot followed in 2nd place, then Tangalooma, The Mistake, Yendys and Australia.   The skiffs experienced some light air patches towards the end of the run to Kurraba, allowing Yendys under a larger spread of sail to move into 3rd place at the rounding mark.   Britannia continued to hold their lead, with Scot now in a position to challenge as they headed up the beat to Clark Island.

Britannia was first to round Clark Island closely followed by Scot, with both crews working hard to get spinnakers up and set for the square run to the finish.   Yendys followed soon after then The Mistake, Tangalooma and Australia.

The ferry patrons were now on the edge of their seats.  It was a close run all the way down to the finish with Britannia the winner by 10 secs from Scot just 9 secs ahead of Yendys, then a gap back to The Mistake, Australia and Tangalooma all finishing close together.

With thanks to our on-water support team of Barley, Carolyn, Russell, Peter, Adrienne, Chuck, Bill, Janis and Bill; post-race support from Ross, Coral and Margot and the rest of our tireless volunteers, along with the dedicated team at Rosman Ferries.  We look forward to seeing you down at the Squaddie next week.