Race 2 of the 2017-18 Season and Heat Two of the Spring Point Score.   An overnight southerly produced fresh winds and cold conditions early in the day, with the southerly predicted to lighten and go around to the south east during the afternoon.  Just four skiffs were on hand to contest this race with three skiffs sitting it out due to lack of staff.

The race got underway from a handicap start off Kurraba Point on the no.3, SE course, with the breeze varying in strength and direction.   Scot was first skiff away off 13 mins followed 2 mins later by Tangalooma, then The Mistake on 8 and Australia on 7.  The Mistake carried a full size no.2 mainsail; the other skiffs a smaller mainsail.   Scot was first to round Clark Island for the run to Taylor Bay, then Tangalooma, The Mistake and Australia.

On the spinnaker run to Taylor Bay the skiffs closed up on each other, with Scot first to round for the beat up to Shark Island, followed closely by Tangalooma, The Mistake then Australia.  The race became quite interesting as the skiffs split left and right, seeking the best course up the beat with the outcome unknown until they converged at the top mark.  Scot was first to round Shark Island for the spinnaker run back to Kirribilli, with the 3 lead skiffs setting peak-head spinnakers while Australia carried a small mast-header.   Halfway down the run, just as it appeared The Mistake was beginning to make a challenge for the lead, the throat halyard on their gaff gave way, forcing them to drop the spinnaker and spend the remainder of the run improvising a repair.

Scot continued to lead at Kirribilli, closely followed by Tangalooma with Australia a few minutes back, while the The Mistake attempted to continue in the race despite the problem with their gaff and a mainsail that would barely set.  Scot and Tangalooma made a long starboard tack towards Bradley’s Head, while Australia having rounded a bit later was able to hold a higher course on the same tack.   Tangalooma was first to tack back onto port and crossed behind Australia.  When Scot tacked back onto port to lay Clark Island she crossed just ahead of Australia.  Meanwhile, The Mistake was doing it tough trying to go to windward on this leg but stoically continued on.

Scot rounded Clark Island first and gybed early to (eventually) set a peak-head spinnaker for the square run to the finish, sailing well above course in the process.  Australia rounded in 2nd place to set a small masthead spinnaker for the square run, then Tangalooma in 3rd place, setting a peak-head spinnaker.  Australia, sailing a lower / shorter course, made up time on Scot and appeared to be sailing through to leeward as they approached the finish, but the bigger spinnaker on Scot prevailed at the end and they crossed the finish line in first place 8 seconds ahead of Australia, then Tangalooma in 3rd, and sometime later The Mistake under a small masthead spinnaker finished 4th. 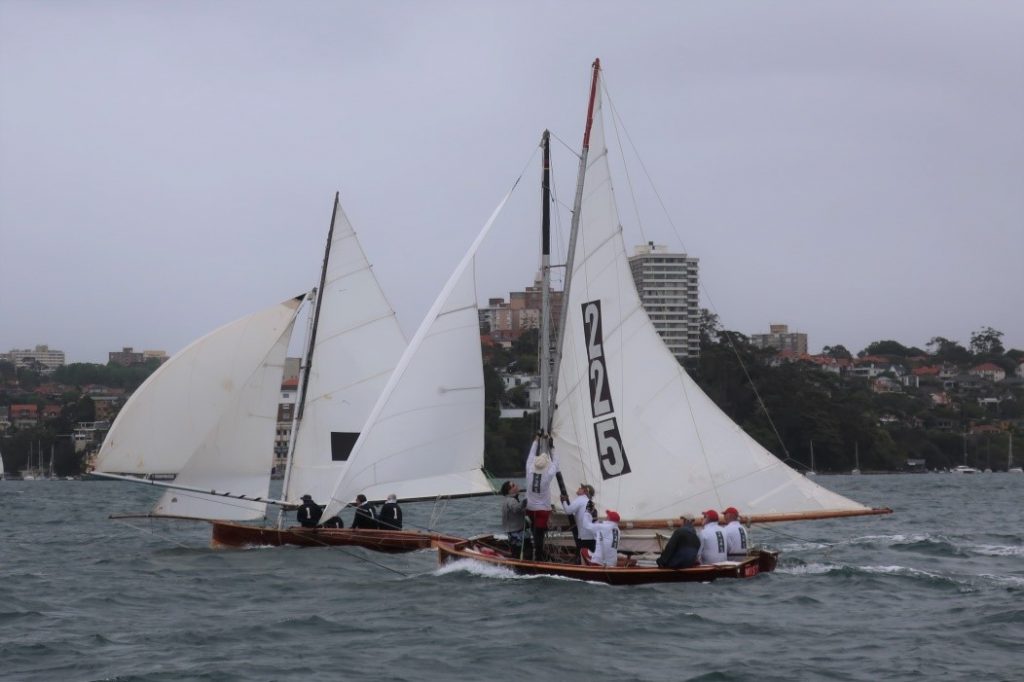 With thanks to our on-water support team of Stu, Russell, Peter, Adrienne, Ian, Bob, Chuck, Owen, Bill, Janis and Bill and the rest of our tireless volunteers, along with the dedicated team at Rosman Ferries.  We look forward to seeing you down at the Squaddie next week.