Race 9 of the 2016-17 Season and first Heat of the Summer Point Score.  A welcome early morning southerly provided some relief from the heat of the previous day, but by mid-morning the southerly was beginning to fade and move around to the south-east.   The 7 skiffs in the boat park had no hesitation in setting up their no.1 big rigs for the day, first time this season for the big sails to come out to play.

The race got underway from a handicap start off Kurraba Point on the no.3 SE course, with a run-out tide and the wind showing early signs of going further around to the east.   Limit boats Britannia and Tangalooma started together for the leg across to Clark Island, followed 1 min later by Scot and Alruth, then 2mins to the Mistake and another 2 mins to Australia IV, then a 10 min gap to Aberdare, who also had to deal with an incoming bulk carrier ship crossing their path, right on-queue.

Tangalooma was first to round Clark Island for the tight main & jib reach to Taylor Bay with a good lead on Britannia followed closely by Alruth, then Scot, The Mistake, Australia IV and Aberdare well back.   On the approach to Taylor Bay, Scot shaved the corner a bit too close and managed to wrap their leeward rigging around the Cardinal Mark to the east of Bradley’s Head, which then required outside assistance from Barley’s support RIB to un-ravel, following which Scot retired from the race. 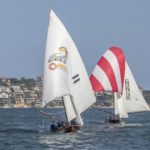 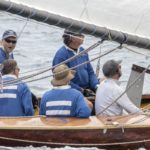 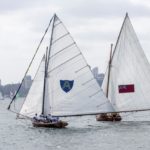 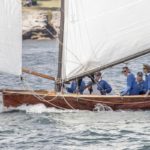 Tangalooma continued to lead the way from Taylor Bay to Shark Island, with a minimal number of tacks required to make the windward mark. Alruth and The Mistake loomed up to challenge Britannia for 2nd place.  Tangalooma was first around the Shark Island mark for the long square run back to Kirribilli, setting their recently acquired (ex-Aberdare) single luff big spinnaker on a port pole.  Britannia, Alruth and The Mistake rounded in close company and also set port poles, but then Britannia opted to gybe and reset their spinnaker on a starboard pole along with a ringtail as the breeze went further into the east.   Australia IV followed, then Aberdare both with starboard pole spinnakers, and a ringtail on Aberdare.    Towards the end of the run Tangalooma, Alruth and The Mistake were unable to make course to the mark and had to drop their spinnakers and gybe early in order to make the mark under main & jib, just ahead of Britannia.

Tangalooma’s lead was now reduced with Alruth and The Mistake having closed up.   Unfortunately, a minor issue at the end of the Alruth’s bowsprit turned into a major disaster when, in the process of sorting it out, the bowsprit collapsed, ending their race.  Tangalooma was first around Clark Island for the run to the finish with The Mistake in hot pursuit, then Britannia, Australia IV and Aberdare now closing in.  Tangalooma and The Mistake engaged in a great tussle down the final run, with Britannia looking comfortable in 3rd place, until their spinnaker poles collapsed under load and broke into many pieces in spectacular fashion half way down the run. Tangalooma held on to win by just 3 secs from The Mistake, then a few minutes back to Britannia in 3rd closely followed by Aberdare and Australia IV.   A day of mixed fortunes and pending repairs.

With thanks to our on-water support team of Barley, Stu, Russell, Judith, Peter, Adrienne, Felix, Chuck, Bluey, Bill, Ian and the rest of our tireless volunteers, along with the dedicated team at Rosman Ferries.  We look forward to seeing you down at the Squaddie.