Race 7 of the 2016-17 Season and Heat 7 of the Spring Point Score.   Plenty of breeze around early in the day after a southerly change swept through Sydney but the forecast indicated it would moderate during the afternoon.  Skippers and crews rigged with no.2 rigs and by the time the skiffs were due to launch they were all carrying a no.2 jib, the breeze was indeed showing signs of lightening off and going around to the south-east. 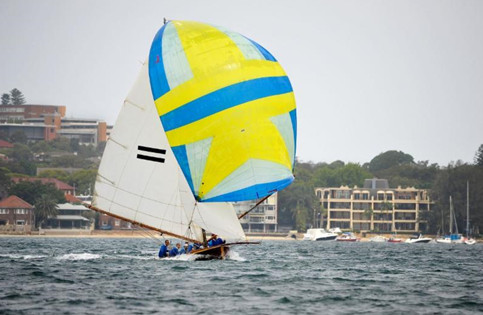 6 skiffs were on the water early for a handicap start off Kurraba Point on the no.3 South East course, with the  breeze around 12-15 kts from the SE and the tide running out. Limit boats Britannia and Tangalooma were first away, a 3 min gap to Alruth, then The Mistake and Australia IV in quick succession, and then an 9 min gap to Aberdare.   Britannia was first to round Clark Island and led the way down the tight shy run to Taylor Bay followed closely by Tangalooma, then Alruth who held off setting a spinnaker, then Australia IV, The Mistake and eventually Aberdare.

Britannia was first to round the Taylor Bay mark, but on the beat up to Shark Island Tangalooma moved into the lead and was first to round the mark for the long run back to Kirribilli.   Britannia rounded in 2nd place but was closely followed by Alruth, Australia IV and The Mistake, then Aberdare.  The breeze had lightened off and moved more to the east/south east at this stage.   Tangalooma under parachute spinnaker pulled away down the run to Kirribilli, where she rounded with a comfortable lead while Britannia, Alruth, Australia IV and The Mistake rounded literally locked together.    Aberdare appeared to make up time on this run, and carried good breeze down to the bottom mark to close on the group ahead. 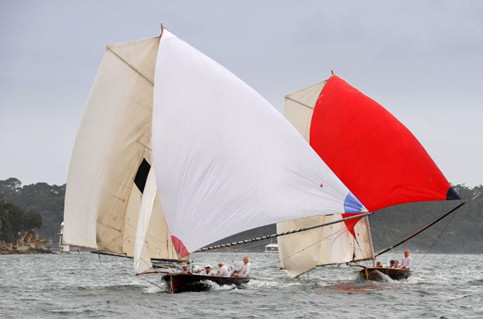 Australia and Mistake with Ringtails

Tangalooma continued to hold a comfortable lead up to Clark Island where they rounded first for the square run to the finish, while the remaining skiffs rounded close together with Alruth and Australia IV leading the way.  Tangalooma took the gun finishing more than 3 mins ahead of Australia IV, then Alruth, Aberdare under ringtail moved up to 4th place, then The Mistake and Britannia also under ringtail.

With thanks to our on-water support team of Barley, Roy, Russell, Peter, Adrienne, Bruce, Felix, Bill and the rest of our tireless volunteers, along with the dedicated team at Rosman Ferries.  Next week is the final race for the Spring Point Score, we look forward to seeing you down at the Squaddie.